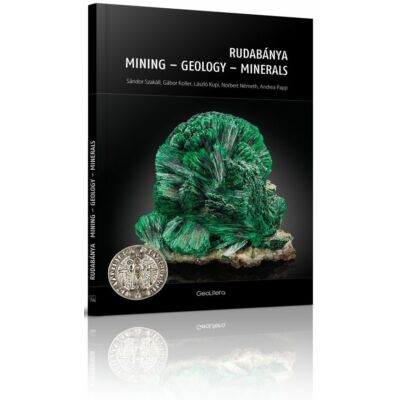 Rudabánya is a mining town with a long and famous history. The settlement is located 50 km north of Miskolc in Northern Hungary and mining has been going on there since times before written history, albeit not without hiatuses of varying durations. Earth pigments, copper, silver and iron ore represent the notable mineral raw materials of the area. Another very interesting feature of the locality is related to significant palaeontological findings in connection with Hominidae. For mineralogists, it is considered one of the archetypal European mineral localities, especially with respect to its secondary copper minerals. Azurite, malachite, native copper, and cuprite specimens from Rudabánya can be found in numerous museums and private collections worldwide. Throughout the almost 40 years which have passed since the closing of Rudabánya’s commercial iron ore mine, knowledge concerning the complex mineral formations of the area has improved considerably. This is the result of renewed ore prospecting efforts, leading to a better understanding of mineralization phases and parageneses. Alongside such progress, the number of recognized mineral species from the mining site has significantly increased thanks to the thousands of samples gathered by collectors and also due to the work of experts studying these samples. Only about 40 mineral species were known when the mine was closed in 1985, but by the time of publication of the present book the number of mineral species found and documented at Rudabánya had increased to around 180. Some of the minerals discovered in recent decades are rarities worldwide and these include samples of silver-mercury-sulpho-halides, and silver and copper amalgams. In 2018 rudabányaite was registered as a new mineral species and accordingly received its name after the mining town. With regard to its mineralogical fame, Rudabánya stands out not only for the splendid occurrence of secondary copper minerals but also because of its unique mineral associations. The reputation that has grown up around Rudabánya over the past 30 years in association with its mineralogical discoveries is due to the efforts of enthusiastic individuaand also in connection with the numerous organized mineral collecting trips that have taken place in the area. A show of gratitude to Hungarian mineral collectors is well-deserved given the tireless work with which they have contributed to increasing knowledge about minerals at Rudabánya. Of the many mineral enthusiasts the following warrant special mention for their part in this process: János Éhik, Gábor Hernyák, István Horváth, Sándor Klaj, Gábor Koller, László Tóth, Győző Várhegyi and Géza Váradi. We would like to thank Ferenc Kristály (University of Miskolc) for the new XRD examinations and Máté Leskó (University of Miskolc) for his help with the new SEM-EDX tests. Délia Bulátkó-Debus (University of Miskolc) contributed generously with the preparation of the samples. Melinda Jánosi and Gábor Papp (Hungarian Natural History Museum, Budapest), Bálint Péterdi (Mining and Geological Survey of Hungary, Budapest), Béla Fehér (Herman Ottó Museum, Miskolc), Andrea Papp (Museum of Mining History, Rudabánya), Uwe Kolitsh (Natural History Museum, Vienna, Austria), and Andreas Massanek (TU Bergakademie, Freiberg, Germany) were most forthcoming with the selection of the museum samples for photography. Finally, Dávid Szabó (Eötvös Loránd University, Budapest) was of invaluable support in providing SEM photos. The last comprehensive monograph to focus on the mineralogy of Rudabánya was published in Hungarian in 2001. The present authors strongly believe that the publication of new work in English for the international public is justified by not only the increased number of mineral species but also by the development of photo and printing technologies. It is hoped that the present volume provides a genuine summary of the developments that have taken place in recent decades and concomitantly brought numerous new results in the mineralogy, geology and mining history of Rudabánya.

History of mining in the area of Rudabánya (Andrea Papp)